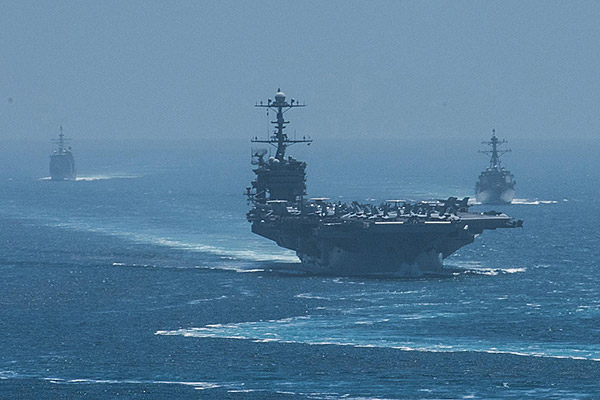 Ships of the John C. Stennis Carrier Strike Group maneuver during formation sailing in the Pacific

Why the U.S. Military Might Not Win a War Against China Easily (If At All)

What would happen if the United States and China were to come to blows?

At least one former top military official believes that if a war between the United States and China were to break out, the outcome would not be as clear-cut as many people might think.

Admiral James Stavridis, formerly the Supreme Allied Commander of NATO and the former Dean of the Fletcher School of Law and Diplomacy at Tufts University, argues that while the United States retains an overall military advantage over China, the gap is narrowing and is likely to continue to do so in the years ahead. And while Admiral Stavridis notes that predicting the outcome of a military conflict requires a deep assessment of a wide range of factors, he points to some key areas which suggest that a military showdown between the United States and China would be a close call.

[ Editor’s Note: Stavridis is one of the finest military leaders this nation has produced. He is also a talented writer, as evidenced by “Sea Power: The History and Geopolitics of the World’s Oceans”, Penguin Press, June 6, 2017. The book is a personal favorite….

When Stavridis speaks on matters of warfare and geopolitics, it would be wise to listen. ]