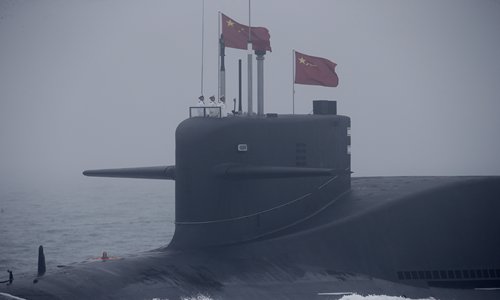 A new type of nuclear submarine of the Chinese PLA Navy is reviewed at a naval parade to mark the 70th anniversary of the Chinese People’s Liberation Army (PLA) Navy off Qingdao, East China’s Shandong Province, on April 23, 2019. (Image: IC)

U.S. public and private researchers are about to get an unprecedented look at the scope of China’s military buildup.

The law calls on Vice Adm. Robert G. Sharp, NGA director, to launch the open-source project on the Chinese military by June 25.

“Per the legislation, NGA has 180 days from enactment to reply on a way forward to the specifics of the directives within the Intelligence Authorization Act,” said Don Kerr, chief of NGA public affairs. “NGA is currently working this formal reply.“

The disclosure mandate was folded into the $1.4 trillion omnibus spending bill signed into law in December. It requires the NGA to work with academic and nonprofit research groups for the open-source intelligence program.