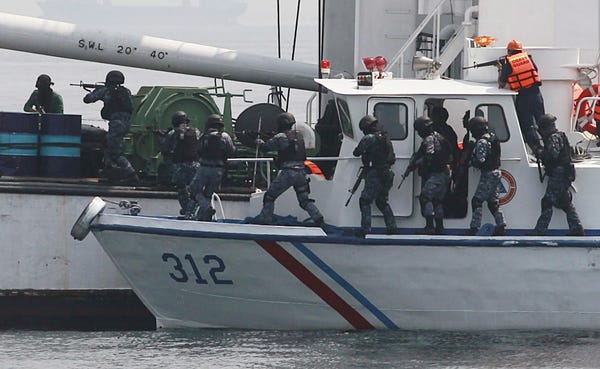 Shippers Call For Coalition Against Gulf Of Guinea Pirates

Major international shipping and maritime companies have called for a coalition to combat piracy in the Gulf of Guinea, where armed kidnappings of seafarers reached record levels last year.

A key shipping route stretching from Senegal to Angola, the Gulf of Guinea has seen pirates, mostly Nigerians, attacking farther out to sea in more sophisticated, violent assaults on commercial ships.

A group of around 100 shippers, maritime companies and trade associations have signed a declaration released on Monday calling for more cooperation to curb piracy in the region, which accounted for almost all maritime abductions in 2020.

[ Editor’s Note: It is highly likely we will see the formation of something similar to Combined Task Force 151 (CTF-151), a multinational naval task force set up in 2009 as a response to piracy attacks in the Gulf of Aden and off the eastern coast of Somalia. Its mission is to disrupt piracy and armed robbery at sea and to engage with regional and other partners to build capacity and improve relevant capabilities in order to protect global maritime commerce and secure freedom of navigation. It operates in conjunction with the EU’s Operation Atalanta and NATO’s Operation Ocean Shield.]