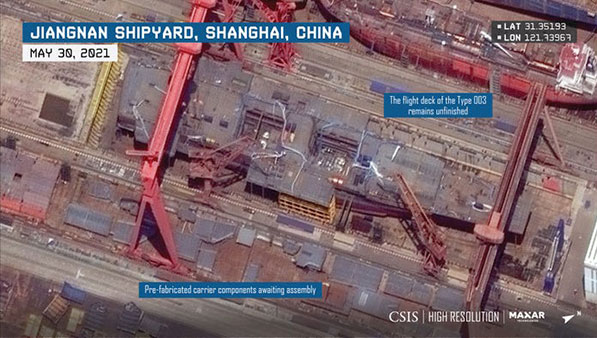 China has made significant progress on its newest aircraft carrier in recent weeks, according to an analysis of the latest satellite imagery.

High-resolution satellite photos taken in May by Maxar Technologies and analyzed by experts at the Center for Strategic and International Studies showed the carrier taking shape at Jiangnan Shipyard in Shanghai, but there was still a lot of work to be done.

[ Editor’s Note: While China is making significant progress with their flattop development and deployment, there is much more to carrier aviation. As described by Admiral Christopher Grady, Commander, U.S. Fleet Forces Command:

“To me that makes all the sense, they’re a maritime power and they understand the great value that comes from carrier aviation and how that can shape the international environment. It’s taken us over 100 years to get that right. A lot of blood, a lot of loss of life, a lot of sweat and tears is what makes naval aviation work. We’ve got a huge lead and one that will continue to expand into the future. Go ahead and build that big ship, but to build the eco-system that is naval aviation that brings that ship to life – that’s going to take a lot of hard work and time.”