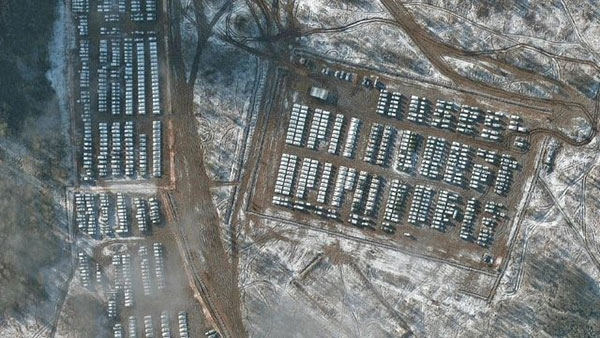 Satellite imagery shows hundreds of Russian armored personnel carriers on the border with Ukraine More than 10,000 Russian soldiers are returning to their permanent bases after a month of exercises near Ukraine, the Interfax news agency reported today citing the Russian military. At last count from western media sources, there were still more than 150,000 soldiers deployed.

Russian troops engaged in a frenzy of ‘exercises’ on the Ukrainian border yesterday hours after Vladimir Putin told US and NATO to ‘go to hell’, stoking fears of an invasion.

The drills come amid claims ‘mass grave’ sites, each capable of accommodating 100 bodies, are being prepared along the Ukrainian border ahead of a possible invasion by Russian forces.

Moscow has for weeks been massing tens of thousands of troops, tanks and artillery pieces along its eastern flank, sparking fears of an invasion, though the Kremlin has insisted it is merely a defence force.