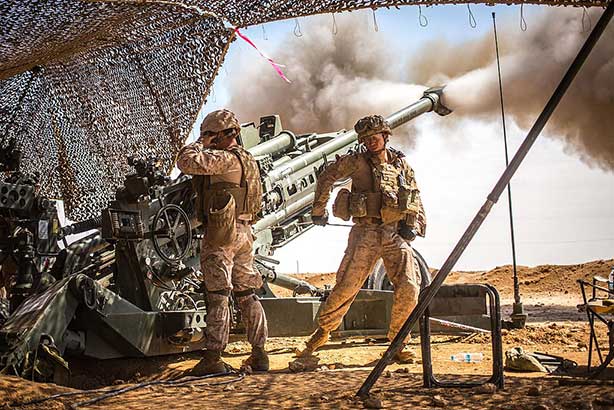 Marines with the 11th Marine Expeditionary Unit fire an M777 Howitzer during a fire mission in northern Syria.

The Pentagon has briefed top lawmakers on intelligence surrounding suspected directed-energy attacks against U.S. troops, and officials identified Russia as a likely culprit, according to two people with direct knowledge of the matter.

The Defense Department had been investigating the incidents, including those targeting its personnel around the world, since last year, according to four former national security officials directly involved in the probe.

Pentagon officials informed at least two key groups of lawmakers earlier this year, in written form and in-person, about the investigation. POLITICO spoke with congressional officials who were briefed on the suspected attacks as part of their oversight duties of the Pentagon.

The briefings included information about injuries sustained by U.S. troops in Syria, the people said. The investigation includes one incident in Syria in the fall of 2020 in which several troops developed flu-like symptoms, two people familiar with the Pentagon probe said. After this article was published, Gen. Frank McKenzie, head of U.S. Central Command, told lawmakers during a Senate Armed Services Committee hearing that he has seen “no evidence” of such attacks against U.S. troops in the Middle East.