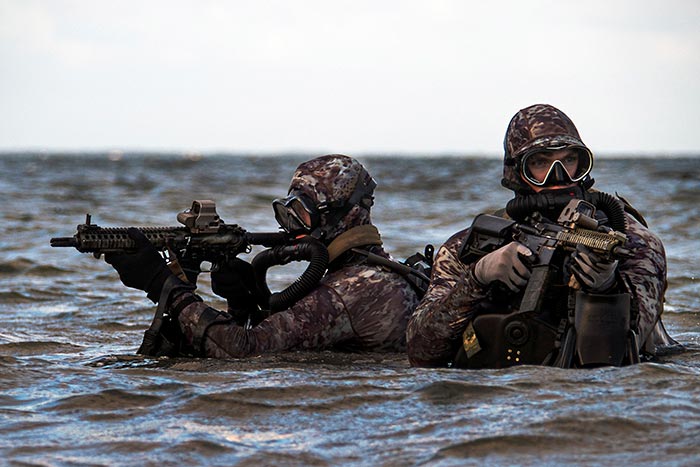 Navy SEALs conduct dive operations training in the Atlantic Ocean, May 29, 2019. SEALs are the maritime component of U.S. special operations forces and are trained to conduct missions from sea, air and land.

Navy SEALs To Shift From Counterterrorism To Global Threats

Ten years after they found and killed Osama bin Laden, U.S. Navy SEALs are undergoing a major transition to improve leadership and expand their commando capabilities to better battle threats from global powers like China and Russia.

The new plan cuts the number of SEAL platoons by as much as 30% and increases their size to make the teams more lethal and able to counter sophisticated maritime and undersea adversaries. And there will be a new, intensive screening process for the Navy’s elite warriors, to get higher-quality leaders after scandals that rocked the force and involved charges of murder, sexual assault and drug use.

Rear Adm. H. Wyman Howard III, top commander for the SEALs, laid out his plans in an exclusive interview with The Associated Press. He said the Navy’s special operations forces have been focused on counterterrorism operations but now must begin to evolve beyond those missions. For the past two decades, many have been fighting in the deserts of Iraq and mountains of Afghanistan. Now they are focused on going back to sea.