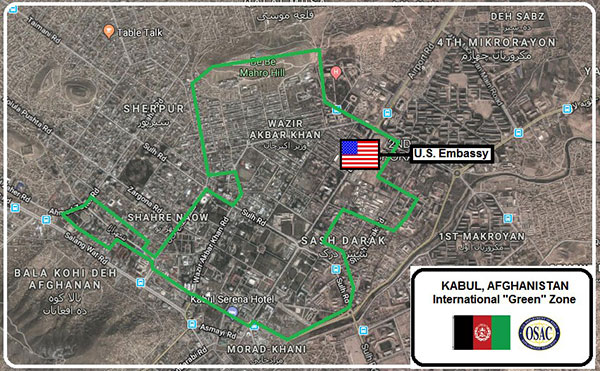 Map of the 'Green Zone' in Kabul, Afghanistan.

Kabul’s former diplomatic quarter fell silent on Monday as foreign missions were moved to the airport, leaving Taliban patrols in control of the fortified zone of concrete blast walls and checkpoints known as the Green Zone.

With police and security contractors who once guarded the embassies in the Wazir Akbar Khan district now gone, some motorists were forced to get out of their cars and lift security barriers themselves before driving through.

“It is strange to sit here and see empty streets, no more busy diplomatic convoys, big cars with guns mounted,” said Gul Mohammed Hakim, one the city’s ubiquitous naan (bread) makers who has a shop in the area.