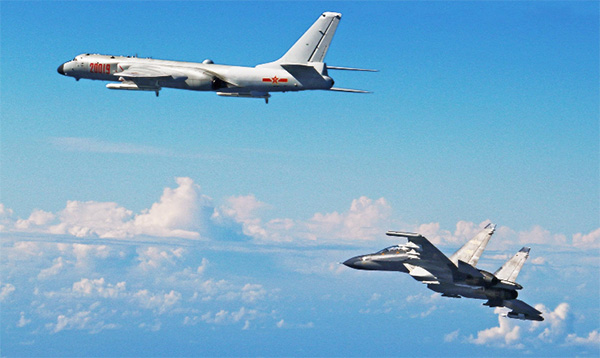 Chinese air force planes, including an H-6K bomber (left) and an Su-30 fighter, fly toward the Western Pacific over the Miyako Strait in Okinawa Prefecture.

The drumbeat of concern from America’s most important Asian ally about China’s military rise is getting louder. Last month Japan’s Deputy Prime Minister Taro Aso warned that a Chinese invasion of Taiwan could threaten Japan’s “survival.” Now Defense Minister Nobuo Kishi has bluntly acknowledged America’s relative decline in the Western Pacific and the need for Japan to assert itself militarily to fill the void.

The remarks came in an interview with Australia’s Sydney Morning Herald. Mr. Kishi “said the shifting power balance between the US and China ‘has become very conspicuous’ while a military battle over Taiwan had ‘skewed greatly in favor of China,’” the paper reports. He added that China “is trying to change the status quo unilaterally backed by force and coercion” and said “we must build a structure where we can protect ourselves.”