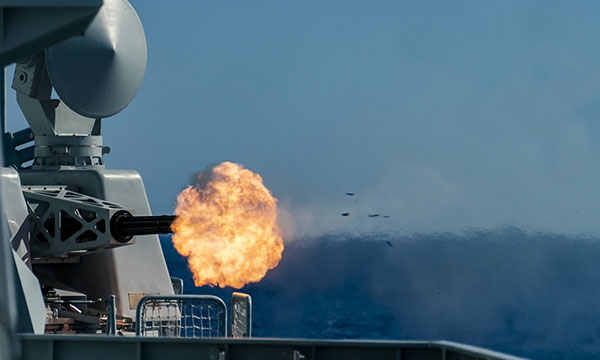 The guided-missile frigate Hengyang (Hull 568) attached to a destroyer flotilla with the navy under the PLA Southern Theater Command fires its close-in weapons system at a mock sea target during a maritime live-fire training exercise in waters of the South China Sea on June 18, 2020. File photo: China Military

China’s Strategy To Control The South China Sea: Defense Of The Indefensible

The perils of imprecise language obsessed George Orwell. Vague, abstract, or euphemistic language made it possible to entertain foolish thoughts. Foolish thoughts gave rise to even vaguer, more abstract, and more euphemistic language. And on and on the cycle toward decadence went. Even worse than inadvertent corruption of the English language was deliberate corruption meant to obscure political misdeeds or shroud them in righteousness. Orwell called willful obfuscation the “defense of the indefensible.” His verdict: political language consisted “largely of euphemism, question-begging and sheer cloudy vagueness.”

Linguistic hygiene is a must when interpreting and replying to a Chinese Communist Party diplomatic offensive. More often than not, party potentates deploy tricksy and false wordplay to salve foreign worries about their motives and deeds. Demanding precision is more and more critical the higher the stakes are for Beijing. High stakes amplify the incentive to deceive. Things commanding surpassing value to party leaders, the armed forces, and ordinary Chinese include such real estate as the Senkaku Islands, Taiwan, and the 80-90 percent of the South China Sea enclosed by Beijing’s “nine-dashed line.”