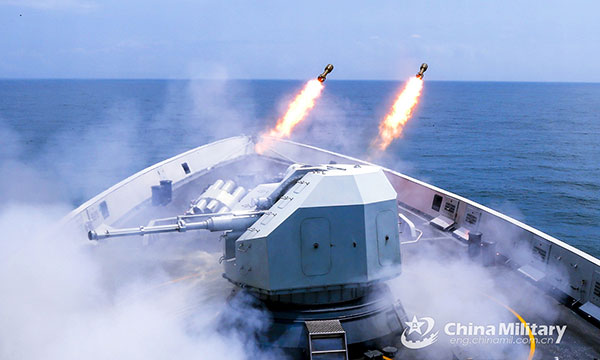 The guided-missile frigate Yulin (Hull 569) attached to a destroyer flotilla with the navy under the PLA Southern Theater Command fires its rocket-propelled depth charges at mock hostile submarine during a maritime training exercise in waters of the South China Sea.

The Chinese military is ramping up massive military exercises in the South China Sea intended to brush back the United States as the Biden administration pleads with the Taliban to bring Americans back home from Afghanistan.

People’s Liberation Army Navy forces are conducting drills in the South China Sea, Yellow Sea, and Bohai Strait near Korea until Thursday. The intense war drills come shortly after another set of military exercises off the coast of Taiwan intended to help China achieve “supremacy” in a potential showdown with the United States and Taiwan, and in response to recent activity in the South China Sea, according to one former Chinese colonel.

[Editor’s Note: Imagine the concerns of every nation with whom the U.S. is allied. Thanks, Joe. NO ONE can trust the U.S. any longer with you and Harris in office. ]