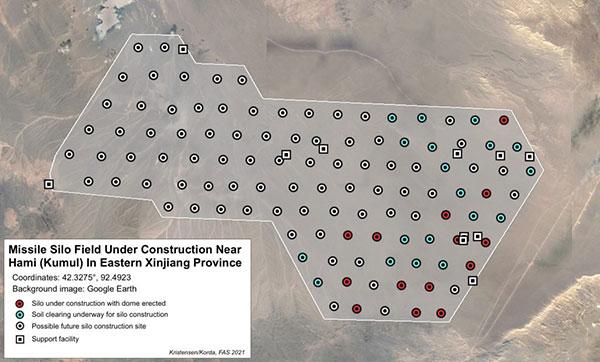 The Hami missile silo field covers an area of about 800 square kilometers and is in the early phases of construction. (Image: Federation of American Scientists)

Satellite images reveal that China is building a second nuclear missile silo field. The discovery follows the report earlier this month that China appears to be constructing 120 missile silos near Yumen in Gansu province. The second missile silo field is located 380 kilometers (240 miles) northwest of the Yumen field near the prefecture-level city of Hami in Eastern Xinjiang.

The Hami missile silo field is in a much earlier stage of development than the Yumen site. Construction began at the start of March 2021 in the southeastern corner of the complex and continues at a rapid pace. Since then, dome shelters have been erected over at least 14 silos and soil cleared in preparation for construction of another 19 silos. The grid-like outline of the entire complex indicates that it may eventually include approximately 110 silos.

The Hami site was first spotted by Matt Korda, Research Associate for the Nuclear Information Project at the Federation of American Scientists, using commercial satellite imagery. Higher resolution images of the site were subsequently provided by Planet.