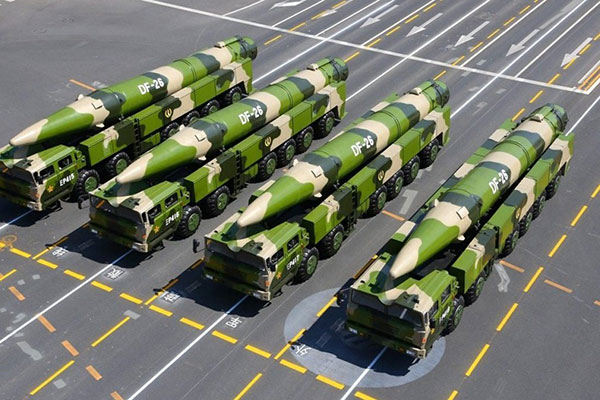 The Dong-Feng 26 is an intermediate-range ballistic missile deployed by the People's Liberation Army Rocket Force and produced by the China Aerospace Science and Technology Corporation (CASC).

Asia is sliding into a dangerous arms race as smaller nations that once stayed on the sidelines build arsenals of advanced long-range missiles, following in the footsteps of powerhouses China and the United States, analysts say.

China is mass producing its DF-26 https://www.reuters.com/article/us-china-anniversary-military-idUSKBN1WG342 – a multipurpose weapon with a range of up to 4,000 kilometres – while the United States is developing new weapons aimed at countering Beijing in the Pacific.

Other countries in the region are buying or developing their own new missiles, driven by security concerns over China and a desire to reduce their reliance on the United States.

Before the decade is out, Asia will be bristling with conventional missiles that fly farther and faster, hit harder, and are more sophisticated than ever before – a stark and dangerous change from recent years, analysts, diplomats, and military officials say.