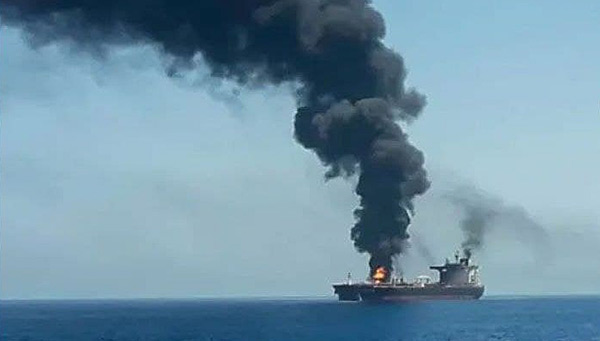 Mercer Street oil tanker after being hit in alleged Iranian attack off the coast of Oman last week.

The United States and the United Kingdom have concluded that one or more Iranian drones were used to target the MV Mercer Street, a Japanese oil tanker managed by a UK-based company owned by Israeli billionaire Eyal Ofer. Officials said a British sailor and the ship’s Romanian captain died in the attack near the Omani island of Masirah as the ship was traveling from Tanzania to the United Arab Emirates.

“Iran continues to act with tremendous irresponsibility,” Blinken said. “We are in very close contact, in coordination, with the United Kingdom, Israel, Romania and other countries. … There will be a collective response.”

[ Any kinetic response will likely set off a larger conflict. We certainly hope Ol’ Joe from Scranton, or whoever else is calling the shots, go about this carefully.]