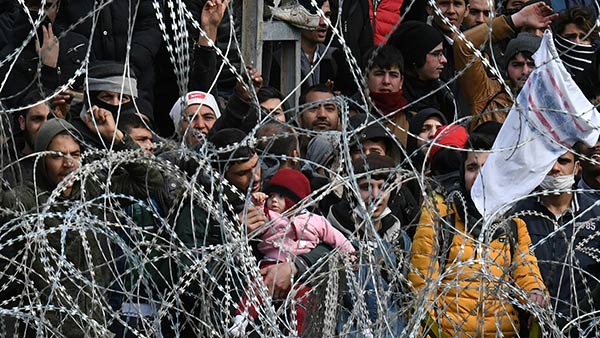 As far as they’re concerned their journey is far from over — they want to get to the countries of the European Union — for them the Promised Land.

But it is a land that is unwilling to accept them and is making plans to deter them from arriving.

Around 2,000 Afghans a day are entering Turkey, and migration experts expect the numbers to surge as the Taliban seizes control of more of Afghanistan.

[ EU nations have every right to be concerned. Most Europeans have maxed out on refugees from the Middle East and North Africa.

In the early 2000s, most of the Islamic terrorist activity in Europe was linked to Al-Qaeda and the plots tended to involve groups carrying out coordinated bombings. The deadliest attacks of this period were the 2004 Madrid train bombings, which killed 193 civilians, and the July 2005 London bombings which killed 52.

There was a rise in Islamic terrorist incidents in Europe after 2014. The years 2014–16 saw more people killed by Islamic terrorist attacks in Europe than all previous years combined, and the highest rate of attack plots per year. Most of this terrorist activity was inspired by ISIL, and many European states have had some involvement in the military intervention against it.

A number of plots involved people who entered or re-entered Europe as asylum seekers during the European migrant crisis, and some attackers had returned to Europe after fighting in the Syrian Civil War. The Jewish Museum of Belgium shooting in May 2014 was the first attack in Europe by a returnee from the Syrian war.

While most earlier Islamic terrorist attacks in Europe were carried out by groups and involved bombs, most attacks since 2014 have been carried out by individuals using guns, knives and vehicles. A notable exception is the Brussels cell, which carried out two of the deadliest attacks of the period. ]